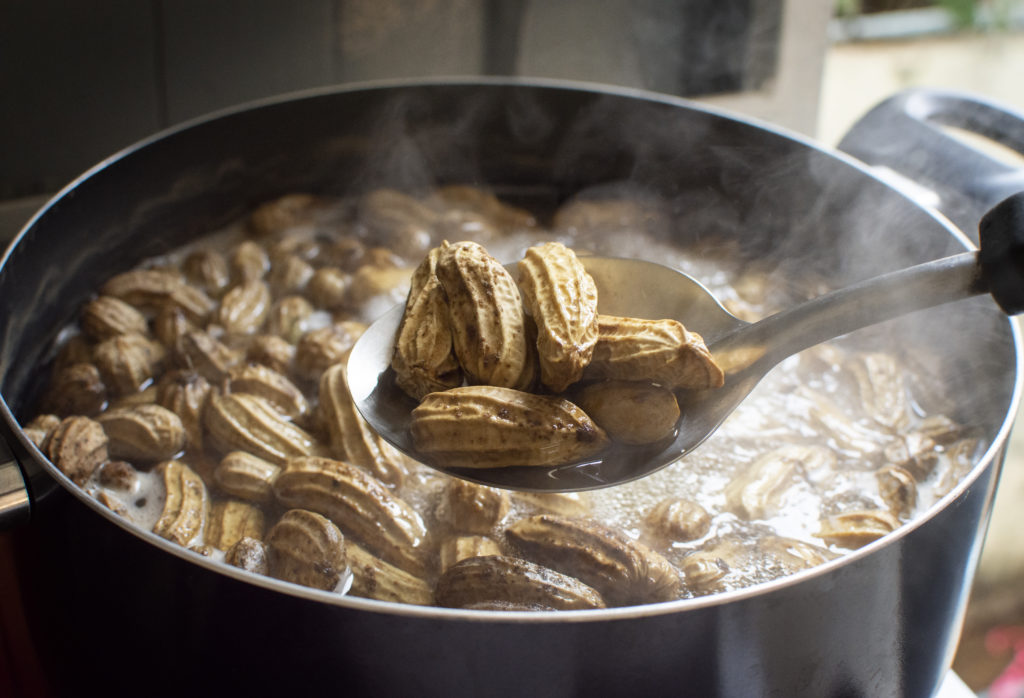 This story appears in the July 2, 2020 issue of the South Carolina Market Bulletin.

As any peanut farmer will tell you, a peanut is not a nut but a legume – and there’s no better way to remind yourself of that fact than to boil it.

Boiling in salt water softens and seasons a peanut, bringing out its sweet, fresh, beany flavors. Wet and sticky, boiled peanuts may seem an unlikely snack to the uninitiated, but they’re addictive, a classic not only in the South but in other parts of the world as well.

Some people are boiled peanut purists, using only salt and water, while others add a variety of seasonings, such as red pepper flakes, fresh chilies, liquid smoke, crab boil like Old Bay or Zatarain’s, and garlic or onion powder. Below is a basic recipe; feel free to vary it as you desire. — Eva Moore

Preparation: Wash and place in-shell peanuts in a suitable container (glass, enamel, ceramic, plastic) to soak. Cover with medium brine: 10 ounces salt to one gallon of water. Use about twice as much water as peanuts. Place a weighted plate on the peanuts to keep them submerged. Soak overnight. Remove plate. Add water as needed to cover the peanuts.

Cook by one of the following methods:

Stove Top Bring the peanuts to a boil; reduce heat to simmer and continue to cook for 4 hours. Test for doneness to see if texture and saltiness are suitable. Add to cooking time in 30-minute increments if softer peanuts are desired. Allow to remain in brine to increase saltiness. Drain as soon as desired texture and degree of saltiness is achieved.

Slow Cooker Cook soaked peanuts on low for 8 hours and then on high for 1 ½ hours. Test for doneness; increase cooking time as needed to achieve desired texture and saltiness.

When cooked, drain and serve hot as a snack or allow to cool, shell and use the peanut kernels to add flavor and zip to salads, casseroles, and dressing to accompany pork, poultry and other prepared dishes. Any peanuts not eaten immediately may be stored in the refrigerator for several days.

Prepare peanuts using either method above. Drain, allow to cool, and freeze in airtight containers. They keep indefinitely.

Prepare peanuts and brine the same as for boiling for immediate use. Pack peanuts into jars to within one-half inch of the top, using equal weights of peanuts and hot brine (212 degrees Fº). Partially submerge containers in upright position in boiling water for 10 minutes. Seal while hot and process 45 minutes at 10 pounds pressure. Cool containers in water, label, and store away from heat.