The chefs are William Cribb of Cribb’s Kitchen and Willy Taco in Spartanburg; Amy Fortes of Flipside Café in Fort Mill; Adam Kirby of Bistro 217 in Pawleys Island, and Sean Mendes of Roadside Seafood in Charleston.

The Chef Ambassadors program seeks chefs who embody the best of South Carolina’s food scene, both in the quality of their provisions, as well as their dedication to using healthy, locally-grown ingredients.

“At the Department of Agriculture, we work to increase demand for all things grown in South Carolina,” said South Carolina Commissioner of Agriculture Hugh Weathers. “The Chef Ambassador program helps us connect South Carolinians with their food and those who grow it, and helps us tell the food story to locals and visitors alike.”

Throughout the year, the chef ambassadors will participate in a number of culinary and tourism specific events, hosting cooking demonstrations, conducting educational seminars and discussing the offerings found in the cities in which their establishments are based.

“Representing fantastic parts of our great state, this program allows these chefs to put a unique spotlight on not only their culinary talents, but the place in South Carolina in which they live, work and play,” said Duane Parrish, director of the South Carolina Department of Parks, Recreation & Tourism. “We encourage visitors and locals alike to make the trip and dine in each of these top-notch restaurants. You won’t be disappointed!”

In its third year, the South Carolina Chef Ambassador program was an initiative Governor Nikki Haley enacted in June of 2014 after Chef Brandon Velie, executive chef at Juniper in Ridge Spring, brought the concept to her.

Early on, Chef William Cribb knew he was destined for a career in the kitchen. With an ultimate goal of owning his own restaurant by his 30th birthday, now at 32, Chef Cribb is the executive chef of two popular establishments in Spartanburg Cribbs Kitchen, which was recently awarded the 2016 Small Business of the Year by the Spartanburg Chamber of Commerce, and Willy Taco, as well as one highly sought after business, Cribbs Catering. Having spent a number of years out in Steamboat Springs, Colorado and North Carolina, learning and honing his culinary skills, Chef Cribb strives to always incorporate fresh, flavorful, seasonal and sustainable fare into his menus items.

Once a trauma surgeon student, Chef Amy Fortes, eventually learned that her true passion was not in the OR, but in the kitchen. After taking a break from studying medicine, Fortes began working at a few restaurants in her hometown of Lockport, New York – just outside of Buffalo. Quickly falling in love with the camaraderie within the culinary industry, Chef Fortes changed her major, and the rest is history. Now the co-owner and chef of The Flipside Restaurant, The Flipside Café and The Flipside Catering Company in Rock Hill and Fort Mill, she thrives on the relationships between great food and great people.

A graduate from Le Cordon Bleu of the Western Culinary Institute, Chef Adam Kirby, a native of Atlanta, Georgia, is the chef and co-owner of Bistro 217 on Pawleys Island – an establishment he’s been with since it opened in 2004. Pulling inspiration from both his Southern roots – both his mother and grandmother where fantastic home cooks – and time spent in Hawaii, Portland and San Francisco, Chef Kirby’s regularly changing menu incorporates locally sourced eclectic elements, making his dishes exciting, flavorful, and most of all, memorable.

Having parents who both served our country in the United States Air Force, Chef Sean Mendes was exposed at an early age to distinctive cuisines and cultures from all over the world. With a father who hailed from Portugal, Spain and a mother from South Carolina, soulful, authentic, interesting and unique culinary experiences were a regular part of his life growing up. In 2012 Chef Mendes opened and operated the wildly popular and successful food truck, Roadside Seafood in Charleston. A year and a half later, he opened a full-fledge restaurant under the same name. In 2016, Chef Mendes decided to venture into the gourmet burger world, opened Blues Burger Joint in Charleston – a hot spot that has been one of the go-to places since opening for “top shelf” burgers. 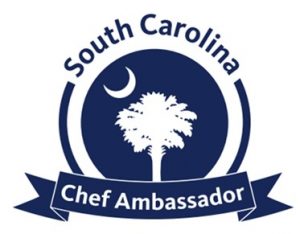